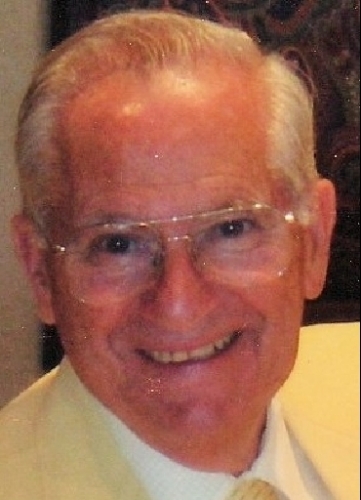 James (Jim) S. Adams of Rye, New Hampshire and Jupiter Florida, formerly of Glen Cove, N.Y., passed away on Saturday, June 14, 2014. Jim was loved dearly by his family and many friends. Born on May 17, 1926, to Soterios and Helen Adams, Jim is survived by his wife of 59 years Dorothy (Jarvis) Adams, sister Mary Yiannacopoulos, sons and their wives Robert and Allyn, Jim and Christine and John and Mary Lou, and their grandchildren Christopher and his wife Dana, Jim, Bill, Michael, Matthew, Kathleen, Lauren, Ryan and Kelly as well as several nieces and nephews. Jim grew up in Springfield Mass. and attended Technical High School where he was class President. He was a WWII veteran and served in the U.S. Navy as a Sea-Bee where he was stationed in the Philippines. He went on to further serve his country as an Ensign in the U.S. Naval Reserve. After leaving the Navy, Jim attended Worcester Polytechnic Institute in Worcester, Mass. graduating in 1949 as both president of his fraternity and his senior class. Jim remained an ardent supporter of his alma mater and in June of 2004 received the Herbert Taylor Award for Distinguished Service. The award is given to those who have demonstrated an extraordinary personal commitment and exceptional service to WPI and whose leadership efforts have affected positive change on behalf of the university. Upon graduation from WPI, Jim worked for AT&T in Cincinnati where he also led a boy scout program for disabled boys. After AT&T he worked for Sperry Gyroscope in N.Y. and then joined the General Instrument Corporation in Hicksville, NY in 1968. At General Instrument, Jim worked in a variety of positions including Vice President and then General Manager, until his retirement in 1991. Throughout the years Jim remained active serving the community as President of The American Friends of the Blind in Greece for over 20 years; as a founder and President of the Robert Constant Memorial Scholarship fund; and with the Masonic Lodge in Glen Cove. He was a member of St. Nicholas Greek Orthodox Church and a member of the local Ahepa chapter. Jim and Dorothy moved to Rye in 1994 and wintered in Jupiter, Florida. They enjoyed many happy years together pursuing their passion of traveling around the world and spending very special times with their family and many dear friends. Services: Visitation will be at the J. Verne Wood Funeral Home Buckminster Chapel at 84 Broad St. in Portsmouth, NH on Tuesday, June 17th from 4 to 7 pm. Wake services will be held at 6:00PM by Rev. Robert Archon. Funeral services will be held on Wednesday, June 18th at St. Nicholas Greek Orthodox Church, 40 Andrew Jarvis Dr. in Portsmouth, NH beginning at 11 am. In lieu of flowers, memorial donations may be made to the American Friends of the Blind in Greece, c/o Cambridge Trust, One Harbour Place, Portsmouth, NH 03801 or St. Nicholas Greek Orthodox Church at 40 Andrew Jarvis Dr., Portsmouth, NH 03801. Visit: www.jvwoodfuneralhome.com to sign the online guest book or to share a memory.